“A human life gains luster and strength only when it is polished and tempered.”

If you want to demonstrate an answer for “what is Karate about,” Kyokushin Karate founder, Masutatsu Oyama, more commonly known as Mas Oyama, can be your answer. With the nickname “God Hand,” very few Martial Artists can match Mas Oyama’s accolades and legend. He fought against bulls and bears and could sever bulls’ horns with his bare hands.

His training and mental fortitude exemplify the training that we all can aspire to. You create a goal that can never be reached, yet train harder each day to achieve that goal with an unwavering determination that you will achieve it. It’s a mentality that can be admired and used as motivation when looking at people who strive for these goals every day. They are not mythical Martial Arts masters of legend and lore but real people we can see and touch.

“One must try, every day, to expand one’s limits” 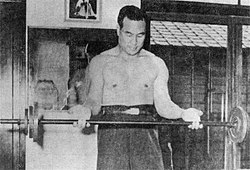 Mas Oyama was born in Korea under Japanese occupation and was sent to live in Manchuria in Northeast China at a very young age.  Like a true Kung Fu flick master, he began learning Martial Arts from a Chinese farmer around the age of 9.

Isolation In The Mountains

Wanting to boost his martial arts training, Oyama went to the top of Mount Minobu. The same place the great samurai Miyamoto Musashi is said to have received inspiration for his double sword system. Oyama stayed there for eighteen months, challenging himself against nature with onerous training methods.

He would sharpen his technique and meditate under freezing waterfalls. Use trees and rocks to condition the bones in his hands, arms, legs, and feet. Large boulders for strength training and increasing his grip strength.

When his daily training was complete, he would read martial arts and Buddhist texts, then immerse himself in deep and contemplative meditation. This was when he began to develop the ideas that would later create Kyokushin Karate.

“Reading good books implants good ideas in the mind, develops good aspirations, and leads to the cultivation of good friends”

When he left the mountain and returned to civilization, he entered the first All Japan Karate Tournament held in Kyoto, which he won. Despite his victory, he still felt that something was lacking in his karate, so he went back into isolation. This time heading for Mount Kiyosumi for another year of fourteen hour a day training sessions and continuous contemplation and reflection. 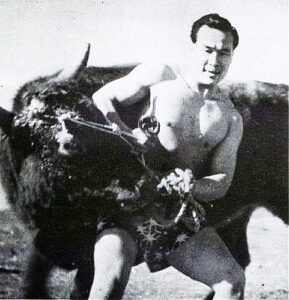 Return From The Mountain And Forging “Kyokushin”

When he returned from the mountain, he sought a challenge to test his strength, bravery, and technique. Oyama decided to pit himself in life or death battles versus rampaging bulls. His first attempt in 1957 nearly cost him his life, forcing him to be bedridden for six months from his injuries.  Apparently not satisfied with the results from his first challenge, Oyama decided to tackle this challenge 51 more times! Three of the bulls were killed instantly by his strikes and 49 had their horns taken clean off by his knife hand strike! Very limited footage is available of his bull challenges, I do question some of the editings that I can find. However, I don’t question his abilities to accomplish the claims.

After he was content with the challenge of fighting bulls, Mas Oyama began traveling the world to test himself in fights against other Martial Artists, competing in over 270 fights. These fights did not last long; allegedly, many were finished with just 1 strike! From years of strengthening and hardening his body, he was even able to break the bones of his opponents when they attempted to block his strikes.

Masutatsu Oyama established what is now known as the 100-man Kumite, an extreme test of conditioning, physical, and mental endurance. Mas set the mark by completing the Kumite 3 times over 3 consecutive days. 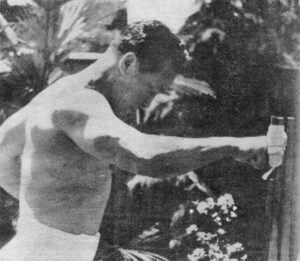 In 1994 at the age of 71, Masutatsu Oyama passed away from cancer. Leaving behind an influential legacy in the Martial Arts community. Kyokushin Karate, “the ultimate truth”, now has over 12 million practitioners and continues to grow.

His catalogue of books including, “What is Karate?” and “The Kyokushin Way” are must have books in any Martial Artist library.

Here is an excellent documentary I found on Mas Oyama and Kyokushin Karate.

“Karate is the most Zen-like of all the Martial Arts.  It has abandoned the sword.

This means that it transcends the idea of winning and losing to become a way of thinking and living for the sake of other people in accordance with the way of Heaven.

Its meanings, therefore, reach the profoundest levels of human thought.

For a long time, I have emphasized that karate is Budo, and if the Budo is removed from karate, it is nothing more than sport karate, show karate or even fashion karate – the idea of training merely to be fashionable.

Karate that has discarded Budo has no substance. It is nothing more than a barbaric method of fighting or a promotional tool for the purpose of profit.  No matter how popular it becomes, it is meaningless.”