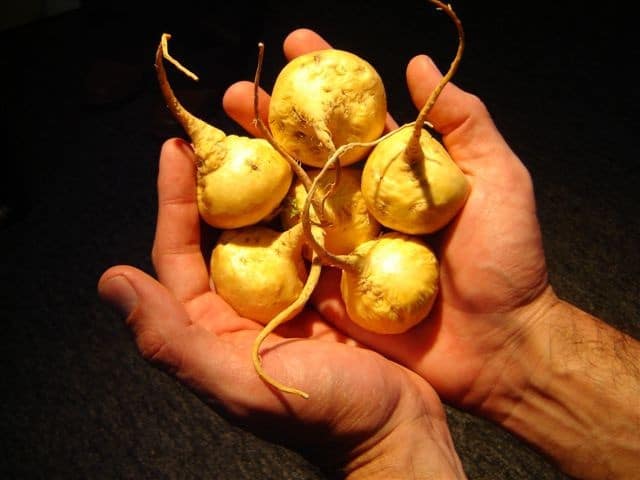 As a husband with a Peruvian wife I’ve learned not to question anything regarding how great anything Peruvian is… at least not out loud.

Maca was no exception so I decided to search the web and find out for myself the benefits and for what is Maca used for. There is a slow buzz stirring lately about Maca and its health benefits, but not a lot of people I talked to had heard about it.

What exactly is Maca?

Maca, also known as Peruvian Ginseng is native to the high Andes mountains of Peru. Once processed it is often dried and used as flour, a dietary supplement, or you can cook it as a root vegetable.  Although called Peruvian Ginseng, it is a closer relative of cabbage and kale.

What are the health benefits?

The most recent was a 2016 report which stated there was possible evidence of increased fertility but more rigorous studies were needed. A 2010 report which suggested possible evidence of increased libido but again, also stated that more rigorous studies were needed. I was also able to find an older study from 2002 that stated an increase in sexual desire was noted after 8 weeks of regular Maca consumption.

It’s good for memory, alertness, and possible Alzheimer’s Disease. Traditionally used in Peru to help children in school. I found some studies that I’ve linked below to back up this claim.

Some studies with rodents from 2011 have shown an increase in memory and learning with mice. An additional report in 2014 suggested an effectiveness in combating and treating the conditions that affect these processes such as Alzheimer’s.

There have been studies that have shown using Maca can help reduce symptoms related to menopause. In the stage before a woman reaches menopause called perimenopause.

A variety of symptoms are caused by a fluctuation of estrogen. A study published in 2006 found that women who took Maca showed a decrease in symptoms from menopause.

Protection from the sun

You can apply Maca to your skin to help protect from sun damage. An animal study from 2011 has shown that polyphenol antioxidants and glucosinolates found in Maca helped prevent UV damage and formation of sunburn cells.

I found several articles that claimed a wide range of benefits. Muscle gain, an increase in strength, energy, and overall improvement in physical performance. I could not find anything with a scientific study to confirm the claims of muscle or strength gain.

However, I did find one study from 2009 which showed an improvement in time for a small group of cyclists on a 25-mile trek after 14 days of using a Maca supplement.

Risk and Side Effects

Overall the belief is that Maca is safe to consume and add to your daily intake. Because of the goitrogens found within Maca warnings are stated for people with thyroid issues. These compounds can interfere with the normal function of the thyroid.

If you listen to the natives of Peru, boiling your Maca is the recommended method. They believe consuming it raw can have adverse health benefits.

I will always recommend people listen to their own body on most supplements, diets, and meal plans. Personally, after trying out Maca for myself I’ve made the choice in adding it to my diet.

I have not felt or noticed any adverse effects or any results in regards to strength or gain in muscle. Though I have noticed an increase in libido, overall energy, and endurance during my workouts.

With Sushi Fitness I try to share all my experiences with the Martial Arts. Workouts for the mind and body, history of Martial Arts, nutrition and supplements I’ve discovered.

I would definitely add Maca to my list of diet or supplement recommendations.

I was able to find Maca at a local health food store. I’ve also found an online company who specializes in Maca and provides a lower price then where I shop locally.

How are you preparing or using it?

What To Fill A Heavy Bag With When Stuffing Your Own

Exploring Boxing Deaths In The Ring