I’ve always been able to find my Zen with Martial Arts. The movement, training, and having that faith or practice I can meditate on. Lately, with the stresses of life I’ve tried to focus on centering myself mentally and spiritually.

Never really understanding the roots of Zen and where the theory came from. I practice what I’ve been taught and learn from self exploration.

Recently I was searching around online and trying to educate myself better on the subject. I was doing different Google searches and following links on Wikipedia to read article after article.

Wanting to share my experience I wondered how I’d convey my personal Zen with Martial Arts. I decided to center on a historical figure that I felt was important for Martial Artists to know about.

The Three Pillars of Zen: Teaching, Practice, and Enlightenment

Like my articles on Mas Oyama and Yasuke I want to write about historical figures in Martial Arts on this blog. To learn more about Total Embodiment Meditation, born of elite Samurai awareness training in Japan, click here.

From what I was learning, the concept of Zen derived from Chan Buddhism.

With his reported early influence on Kung Fu I felt writing about Bodhidharma would be appropriate. Bodhidharma was Buddhist monk who lived during the 5th or 6th century. He is credited as spreading Chan Buddhism to China and is regarded as its first Chinese patriarch.

According to Chinese legend, he also began the physical training of the monks at the Shaolin Monastery. This is what  led to the creation of Shaolin Kung Fu.

Bodhidharma was bothered by the poor physical shape of the Shaolin Monks when he arrived.

After which, he instructed them in techniques to maintain their physical condition as well as teaching meditation. Bodhidharma taught a series of exercises called the Eighteen Arhat Hands. Also, a practice called the Sinew Metamorphosis Classic.

After he left the temple, two manuscripts by Bodhidharma were discovered inside. Of the two manuscripts, copies of the Yijin Jing survive to the modern day. Unfortunately, the Xisui Jing has been lost to time.

Although traditionally credited as founder of the martial arts at the Shaolin Temple, martial arts historians have shown this legend stems from a 17th-century qigong manual.

One of the more familiar Shaolin historical accounts is a story that claims that Bodhidharma introduced boxing into the monastery as a form of exercise around a.d. 525. First appearing in the novel, The Travels of Lao T’san in 1907. This story grew rapidly through a popular boxing manual, Secrets of Shaolin Boxing Methods. It has a vast oral circulation and one of the most “revered” narratives shared within Chinese-derived martial arts.

The belief that this story is a twentieth-century creation is from writings at least 250 years old. It mentions both Bodhidharma and Martial Arts but makes no connection between the two.

Subsequent accounts have become encrusted with legend and unreliable details. According to the primary Chinese sources, Bodhidharma came from the Western Regions which refers to Central Asia. Also this may include the Indian subcontinent and he was possibly a “Persian Central Asian”. Another claim states he was a “South Indian, the third son of a great Indian king.”

In Buddhist art Bodhidharma is depicted irascible, bearded, and non-Chinese. At times referred to as “The Blue-Eyed Barbarian”. 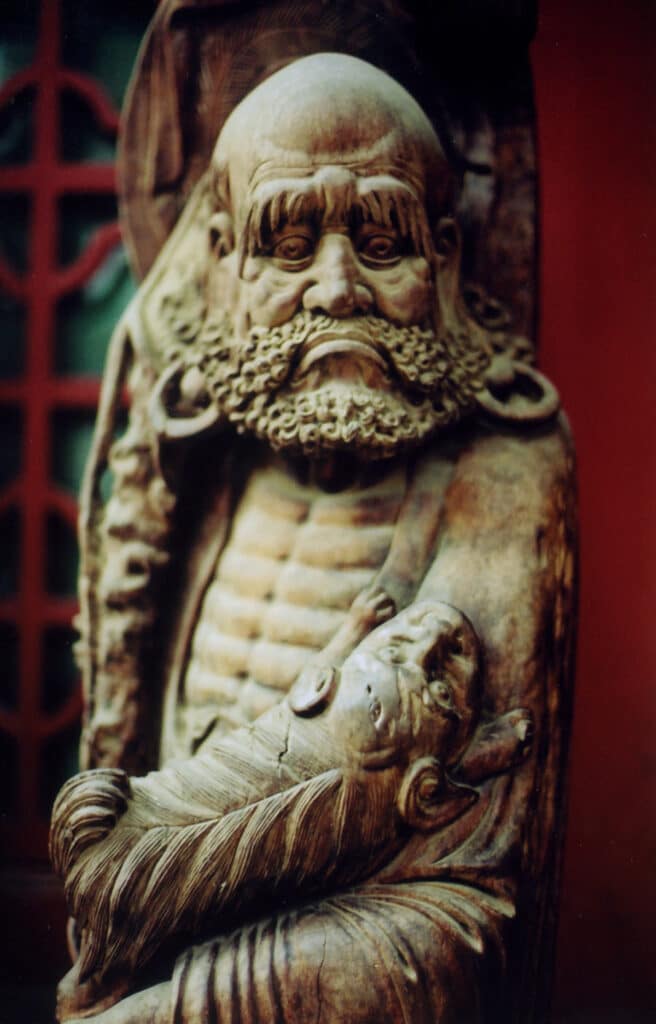 After he Failed to make a favorable impression in South China, Bodhidharma travelled to the Shaolin Monastery. After arriving he was not allowed to enter, or was immediately asked to leave. He then decided to live in a nearby cave. There he “faced a wall for nine years, not speaking for the entire time”.

Bodhidharma’s teachings and practice centered on meditation and the Laṅkāvatāra Sūtra. Often mentioned as a “Holy Grail” of Zen, you can find Laṅkāvatāra Sūtra translations in novel form online.

Tradition is littered with legendary tales about Bodhidharma’s life and circumstances.

There is one version of the story, that after seven years into his nine years of wall-gazing he fell asleep. Angry with himself over this, he cut off his eyelids to prevent it from ever happening again. As legend states, as his eyelids hit the floor tea plants sprang up. Thereafter tea would be a stimulant to keep students of Chan awake during zazen.

In the most common version he was finally admitted into the Shaolin temple after nine years in the cave. After which, he taught there for some time.

However, other versions claim that he died and was found still seated upright. Also, another states that he disappeared, leaving behind the Yijin Jing. Another claim is that his legs atrophied or wasted away after nine years of sitting. Reportedly the reason why Daruma dolls have no legs.

Where to separate myth from legend when learning of historical figures can be difficult at times. I always assume there is some exaggeration but also assume some truth. Often times I feel the greater the legend the more amazing the true story was .

Perhaps the greatness of the legend is the snowball effect over time. Stemming from the initial impact an individual made on this planet.

Finding My Zen With Martial Arts

I’ll never find a fidelity that would allow me to stare at a wall for seven years or cut my eyelids off in failure. However, I can look at someone like Bodhidharma and realize the conviction and strength of faith that is humanly possible. For me this helps take credibility away from “not finding time” to do the things necessary to center myself.

Punching the bag, running, hitting the weights, or even just stretching and clearing my mind for twenty minutes. I make a conviction that no matter the craziness of  life I find that time for myself to realign and find my Zen with Martial Arts.

We all need to find that hobby or activity that helps ground us. To keep us centered in a fast paced hectic world.

How do you find your Zen and what do you do to center yourself in the chaos of life?

The Art Of War Book By Sun Tzu: Each Chapter Reviewed